Last night (Wednesday 1st June) saw Newry Wheelers promote their annual Criterium races around the Co.Down City streets.
The weather was perfect for the night and the good crowds enjoyed the high quality racing which saw a full programme of events, kicking off with the Under 12`s where Donegal`s Adam McGeever  (AAA) attacked from the gun to take a solo win ahead of Quillan Donnelly (Bikeworx) with Maria McAllister (Island Wheelers) in 3rd place.

The under 14 event saw another dominant display, this time from Ryan Gereghty Bikeworx with Errigal`s Odran Doogan taking the sprint for 2nd ahead of Team Madigan`s Chris Donald.

The under 16 race was very evenly matched and although all the riders gave it a good go, it was a sprint that would decide the outcome with Ballymoney-Beistey`s rider Shay Donley Ballymoney narrowly taking the verdict ahead of Donegal`s PJ Doogan and Conor MC Keown from Cuchulainn.

The club race for Newry Wheelers members followed next and Sean McAvoy made the most of a small handicap which saw him latch on to the back of the main bunch where he couldn’t be shaken off , taking the win over Conor Quinn.

The main event of the evening for  A1s, 2s and 3s saw some of Ulster`s top Criterium specialists  take to the line, with Belfast`s Glenn Kinning and Gareth McKee (Banbridge) wasting no time in attacking the bunch in a move which would eventually see them lap the entire field. 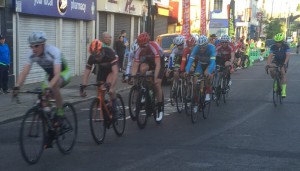 McKee struck out for a solo win with 3 laps to go and looked like he had Kinning on the ropes but the experienced Belfast rider didn’t  give in and chased McKee right to the line, where he pipped him for the win. 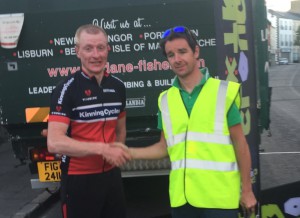 In the sprint for third John Buller showed he has a great kick taking the verdict ahead of Gary Donaldson and Mark McKinley who couldn’t be spilt by the finish line camera.

The weather helped to make great night`s racing and a great cycling showcase which opens the floodgates for a host of town-centre racing to come across Ulster in the coming months over the summer.

Newry Wheelers would like to thank all the club members who assisted on the night, and supporters -Haldane Fisher, Cloughmor Extreme, the PSNI and Newry, Mourne and Down District council.