Jake Gray led the chasing bunch home to finish in 4th place on today`s final stage, of the McKinley Construction Newry 3-day, which was enough to secure him the overall win for the second year running – but it was a close run thing, as was the racing all weekend.

The teenager went in to the final stage with an 8 second cushion over Phoenix man Cathal Smyth, and todays 73 mile trip across the Mournes was won by English visitor Nick Clayton (Halesowen Academy), who moved in to second place overall.

Behind Clayton was the chasing duo of Craig Sweetman and Neil Seffen, with Gray leading a 60-rider bunch home at 14 seconds behind the stage winner.

This was enough to give him the overall win  by just 7 seconds from Clayton with Cathal Smyth (Phoenix CC) 3rd  and Liam Wilson (Powerhouse) 4th. 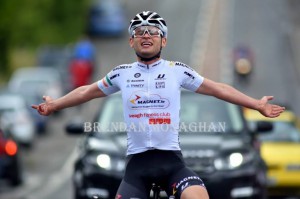