With three stage races all taking place across Ireland, it was a busy weekend for Cycling with Ulster riders in action in Ulster (The Tour of the North), Leinster (The Gorey 3-day) and Munster (Ras Mumhan), with representation on national teams in the latter two events.

The best result over the Easter weekend was Chris McGlinchey, who in riding for the National Development squad scored a memorable win in the Ras Mumhan in County Kerry.
McGlinchey set his stall out early, in winning the opening 105km stage from a small nine man group.
Under the guidance of team manager David McCann, McGlinchey fought Irish powerhouse Bryan McCrystal on stage two over the 144km stage where the pair were too good for the rest of the field, with McCrystal taking the stage, but McGlinchey holding on to his overall lead of one minute six seconds over McCrystal.
The National squad rode faultlessly over the remaining stages, with McGlinchey 15th on stage 3 and  7th on the final stage to win overall by a margin of 1min 26 sec over fellow Ulsterman Ali MacAuley (Asea Wheelworx) and McCrystal 3rd.
Below. Chris McGlinchey, fast making a name for himself in top level domestic racing ran out an impressive winner of the Ras Mumhan in Kerry over the Easter weekend. (Pic The Belgian Project – Davy McVeigh) 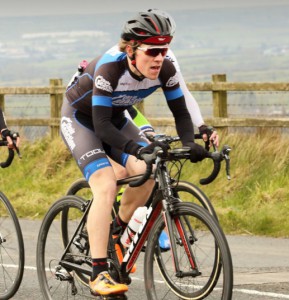 Meanwhile in Leinster the National Junior squad had a trip to Belgium cancelled due to the terrorist attack in Brussels, but managed to get a ride in the Gorey 3-day, where once again Ulster riders Marc Heaney, Jake Grey and Xeno Young accompanied Robert O`Leary, Tom Knight  and Luke Smith in the National Junior squad. A win for O`Leary on stage one saw him lead the squad throughout the weekend to win the event overall. All Ulster riders acquitted themselves well under the guidance of national Junior Manager Frank O`Leary, with another Ulster rider Cameron McIntyre – representing the Nicolas Roche squad finish runner up and take the Points classification. 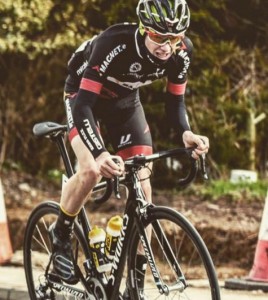 Closer to home in Ulster, the 4-day Tour of the North took place across the Ards peninsula, however there were no representative teams despite Ulster having hoped to field a top-class Junior squad.
The event was dominated by English visiting team Spirit Bikes team, where strongman Ed Clemens almost lapped the field in the opening Kirkistown Motor Racing Circuit stage. This signalled his, and his Spirit Bikes team`s intentions as they went on to dominate the weekend in some challenging conditions.

There was to be no two-in-a-row glory for local man Davy Watson (North Down CC) who finished best of the local riders, in 3rd place overall, seen here leading the peleton around his local roads on the Ards Peninsula. (Pic The Belgian Project – Davy McVeigh) 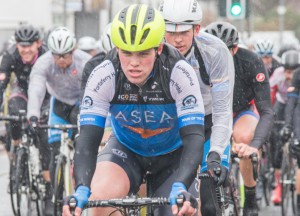