Dubliner rider, and National Track Scratch Race Champion, Eoin Morton, made his way to Country Antrim to kick off his 2016 season, and in doing so claimed victory in the hard-fought George Rooney Phoenix GP at Nutt`s Corner.

The UCD  rider, who was due to travel to the US as part of the `Dublin Thunder` track team taking part in the World Cycling Series, event  just got the better of Adam Armstrong in a controversial two-up sprint finish.

With six laps of an 8½ mile circuit to complete, the total race distance of 51 miles was in keeping with the early-season Ulster events, although the attacking racing and weather conditions made for a hard day.

The aggressive A2 bunch were active from the off, however the race came together by around half distance, with the strong men forging ahead in small groups, with 10 riders forming at the head of affairs on the final circuit.

With numerous attacks towards the end of the race, it was Armstrong and Morton who pulled clear to fight it out for the win; in a long sprint which saw Armstrong unhappy, claiming Morton had baulked him in the final 200 metres, however the result was upheld – albeit with Armstrong vowing revenge later in the season!

Below A close finish in the A1 event. (Pic. Toby Watson) 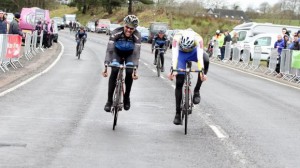