Ballymoney CC’s Shay Donley took a superb 8th in the road race at the European Youth Olympic Festival in Hungary yesterday. Fellow Ulsterman, Cathir Doyle (Carn Wheelers) who on Tuesday finished 19th in the time trial took 43rd place in the road race, coming home in the same group as Donley. Donley’s result equaled the best ever result by an Irish cyclist in the history of the Youth Olympics which had come only hours earlier in the girl’s road race.

Ulster’s Nicola McKiverigan was part of the Irish coaching staff for the event, specifically looking after the girl’s team who took a silver medal in the time trial on Tuesday. Cycling Ulster would like to congratulate the Ulster members of the team and the entire Irish cycling squad on their fantastic performances. 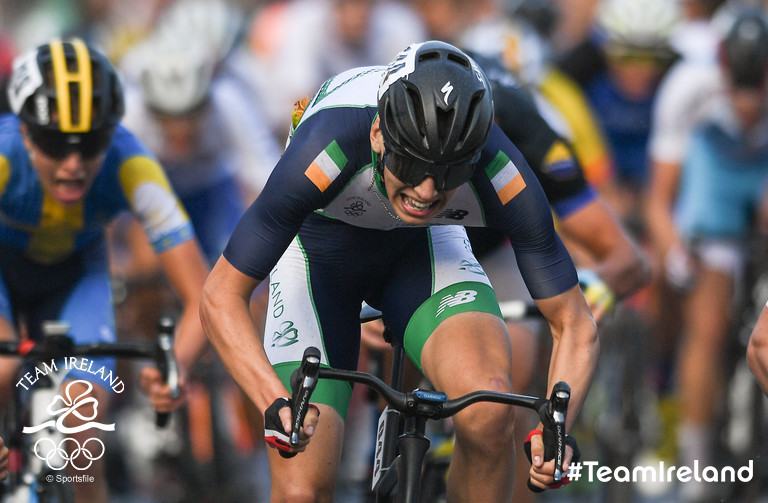 Gallagher and Donley Shine at EYOF

Maeve Gallagher and Shay Donley both finished impressively in 8th place in their respective Road Races at the European Youth Olympic Festival (EYOF) in Gyor, Hungary today. These results place the two riders in the history books as the top finishes for Irish riders in a Road Race event at the EYOF.

The girl’s race was a fast one, with the race finishing ten minutes ahead of schedule. In the first lap of the 44.5km race, a crash affected Lara Gillespie, forcing her to chase for 8km before reaching the main peloton. Gillespie, silver medallist from earlier this week, finished in 18th place despite this effort, just outside the formidable 8th of her Mayo teammate, Gallagher.

Caoimhe O’Brien was also involved in a crash in the closing stages of the race, with her bike faring worse off. The determination of the 15-year-old Lakeside Wheeler shone through, with her carrying the bike over the line to finish in 60th place.

In the Boy’s race, the 71km race was at the upper end of the distances normally raced by the youth riders; that didn’t deter Ballymoney’s Shay Donley, with the respected sprinter finishing 4th out of the main group, and 8th overall. The medals were decided from a select group of four, who managed to remain almost a minute ahead of the bunch on the line.

Finishing in the same group in 43rd place was Derryman Cathir Doyle, with Mark Smith crossing the line 30 seconds later in 69th place.

This brings to an end what has been Ireland’s most successful European Youth Olympic Festival to date, with Lara Gillespie winning Ireland’s first ever cycling medal, a silver in the 10km Time Trial on Tuesday. Today’s performances from Gallagher and Donley also rank high, as the top finishing positions for Ireland at this event.