Aiken`s second win in as many weeks dominates early season

A last minute change of route did nothing to prevent the Asea domination of the Castlereagh CC-promoted John Moore memorial GP at Carryduff, which saw local man Roger Aiken take his second win of the 2016 season in as many weeks. In what was a team effort, Aiken praised the efforts of teammate Adam Armstrong in setting him up for victory, with in-form Chris McGlinchy (Chain Reaction) spoiling an Asea 1-2

Armstrong, making a superb early-season comeback following a quiet spell, was the strong man of the race, and his typical big-gear grinding attacks wore down the opposition, leaving Aiken fresh for the finish.

Armstrong had just bridged across to Aiken`s leading 5-man group on the final lap when he put in a strong  attack to soften up the potential contenders
Lindsay Watson (Plush) Put in a final attack about a kilometre out from the finish, but this was quickly brought back, allowing Aiken to take his second win of the season. 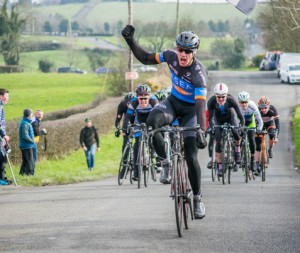