On a busy weekend`s racing, Ulster riders dominated events across Ireland whether it was local racing in Hillsborough on Saturday, or the Champion of Champion`s Time Trial in Newtownards and Shay Elliott Memorial in Bray on Sunday; local riders were to the fore across all events.

Saturday saw the Maryland Wheelers promote their Tommy Givan Memorial races in Hillsborough, with the programme including the McCann-Givan cup for Under 16 riders, and also a round of the Ulster Women`s league.
In the Youth race it was 2015 Under 15 National Champion Adam Ward who dominated proceedings, attacking almost from the `off` to gain a slight advantage which he held throughout most of the race. Always in sight of the bunch, Ward was caught on the final lap but still had enough left to narrowly take the sprint from Ballymoney`s Shay Donley, with Leinster visitor Liam Hanley taking third.

Result. McCann-Givan Cup for Under 16s. 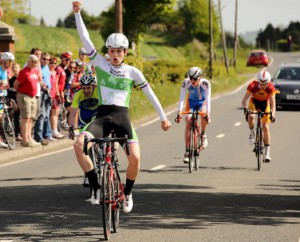 The Women`s event saw a good turnout for a Cycling Ulster women’s race with top riders Claire McIlwaine, Orla Montague and last year`s runner-up Rachel Mitchell among those making their first appearance in the league.
On the first lap the Girls almost caught the Under 16 event, with McIlwaine doing the bulk of the driving as she did throughout the race. Despite attacks on the second lap, the group stayed pretty much together for the remainder of the race, setting up a bunch sprint back in Hillsborough, which in a close call, went to McIlwaine, with Montague taking second and league leader Katherine Smyth (Team Madigan) third. 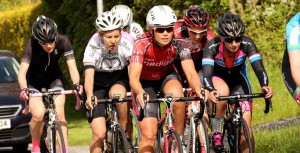 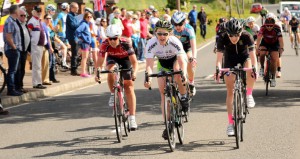 The feature A1-3 event saw some riders using the race as preparation for the following day`s Shay Elliott, but nonetheless it proved to be a tight race over 7 laps of the 9.5 mile undulating course around Hillsborough and Annahilt.
In the end it was Keevan`s Derek Finnegan who took the win with a bike-length to spare over North Down`s nearly-man James Ambrose, with Carn Wheelers ever-improving Johnny Taylor in 3rd.

In one of the only `classic` 25 Mile Time Trials left on the Ulster Calendar, Ards CC promoted their `Champion of Champions` event in Newtownards on Sunday morning, with the province`s top Testers keen to add their name to Boardman and O`Bree; both previous winners of this event.
It was local Bangor man Ian Inglis (Black Rose Racing), best known these days as a Paralympic Pilot, who put his fixed-wheel skills to good use to win by over half a minute from Paul Carrol and add his name to the trophy for a second time. 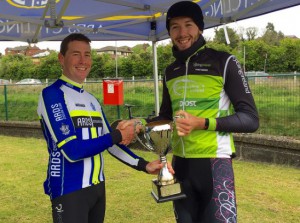 Also on Sunday, Ulster riders dominated one of Ireland`s most prestigious one-day races, the Shay Elliott Memorial in Bray, where the honours came down to a two-up sprint between two Ulstermen who had been active throughout the day, but made their final escape within the final 20km of racing, where Potts took the sprint to the line ahead of youngster McAuley, with another Ulster youngster, Darnell Moore just missing out on the final podium place; taking 4th spot.

The A4 race was dominated by Junior riders – all from the Nicolas Roche Performance Team, with Ulster`s second-year Junior rider Jake Gray taking the verdict from team-mates Aaron Kearney, Ben Walsh and Cavan`s Luke Smith.

ALL PHOTOS THANKS TO DAVY McVEIGH – THE BELGIAN PROJECT