The first weekend of September saw 8 Ulster youth riders heading to Loughborough University for this years School Games. The event this year saw a combination of Track and Road cycling. This gave the riders the experience of a multisport/multidiscipline event together with a full athletes village.

The riders journey started on Thursday 30th August with an early 7am flight. All 16 bikes were transported by the Team Manager, Paul Dixon, on the ferry. Given the early start, once the riders had arrived and had been allocated their rooms, they rested up until lunchtime. After lunch, they were able to visit the Athletes Lounge and familiarise themselves with the campus. Later that evening after dinner, they attended the first of two educational workshops, this one based upon social media and how professional athletes handle this when in competition. 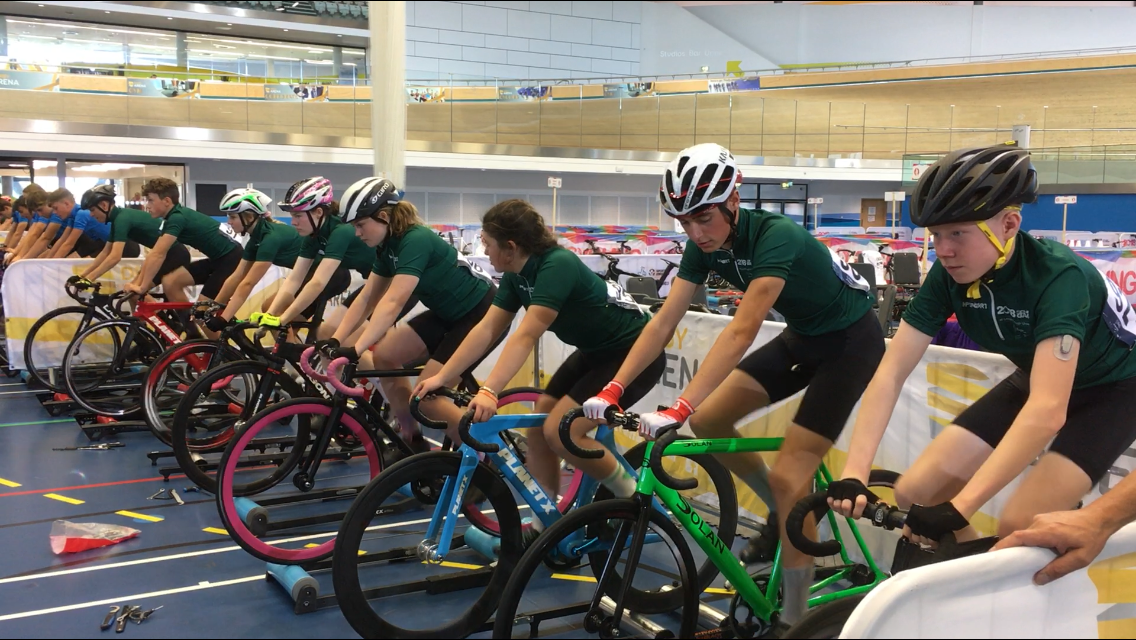 Friday and the riders travelled to Derby Velodrome. The events scheduled for the day were elimination races, scratch races, mechanical challenge and the longest lap. All of our riders gave their all in the events. It was always going to be difficult competing against riders who ride the boards week in week out all year round, whereas our riders have probably been on the boards two or three times in the last year. Two of our riders narrowly missed out on the Major finals later that afternoon. The one we had all been dreading was the mechanical challenge which involved stripping the bikes down and rebuilding. We had practised this a couple of times at Orangefield and the practice paid off with the team finishing in a time of 7 minutes 12 seconds and in 3rd place overall. The longest lap presented some problems for our riders as this required two track stands of 30 seconds and 45 seconds on the steep track. Again, we had tried to practice this at Orangefield, but the indoor velodrome is very different. We had one rider completed both fully and then rode the final lap. We weren’t the only team to struggle with this, as two of the English teams didn’t finish the event. 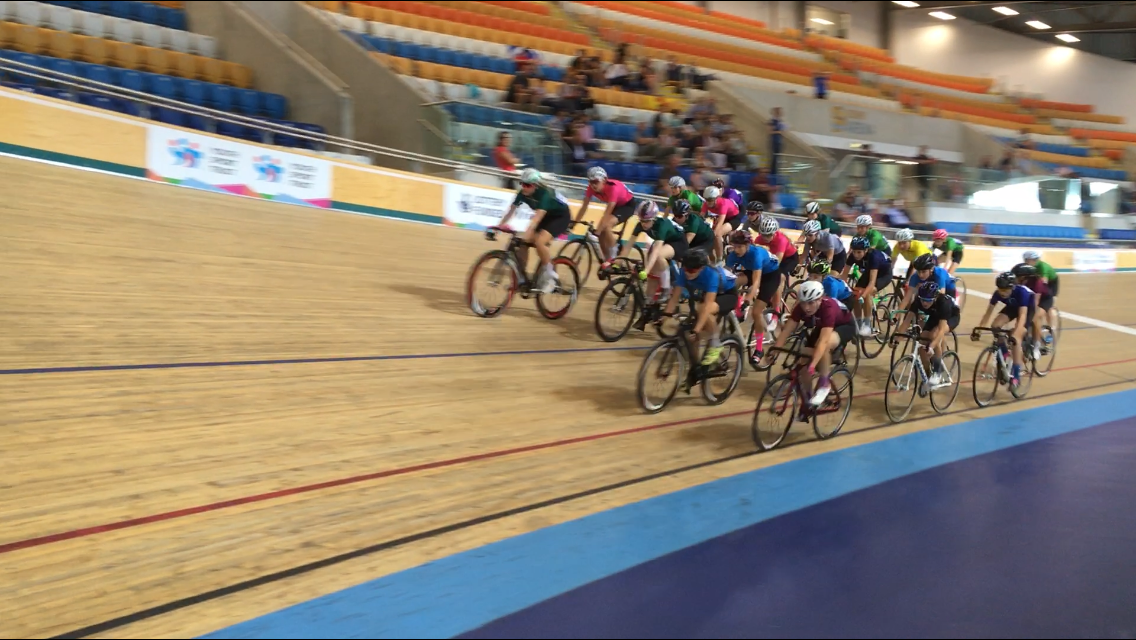 After the events in the Velodrome, we headed back to Loughborough for the Opening Ceremony that evening, which had music and special guests. Riders then returned to their flats exhausted and ready for bed.

Thankfully the next day was based on campus for the street sprints. These were based over a 250 metre uphill circuit with a couple of tight turns. It is a type of racing which again we aren’t really used to, although hopefully this is something that could be introduced next year to some of our youth events. Riders rode the course as an individual tt first of all. We had two riders finish in the top 10 on the individual event. Once the individual times were set, these determined your starting heat for the competition. Riders were then grouped in fours and had to race over the course. The top 2 in each heat moved up to the next group and the riders in 3rd and 4th place moved down the the next group. There were two heats and a final round to determine final places. These were very tactical races with riders starting positions being critical. Unfortunately, for the initial heats, the comms simply let riders squabble over their starting positions, and as other riders knew each other, some of our riders got squeezed right from the start. We also had one rider crash heavily into the barrier with another rider. Thankfully they weren’t too bad and got to bring the dented part of the barrier home. We finished day 2 with two riders in the top 20. 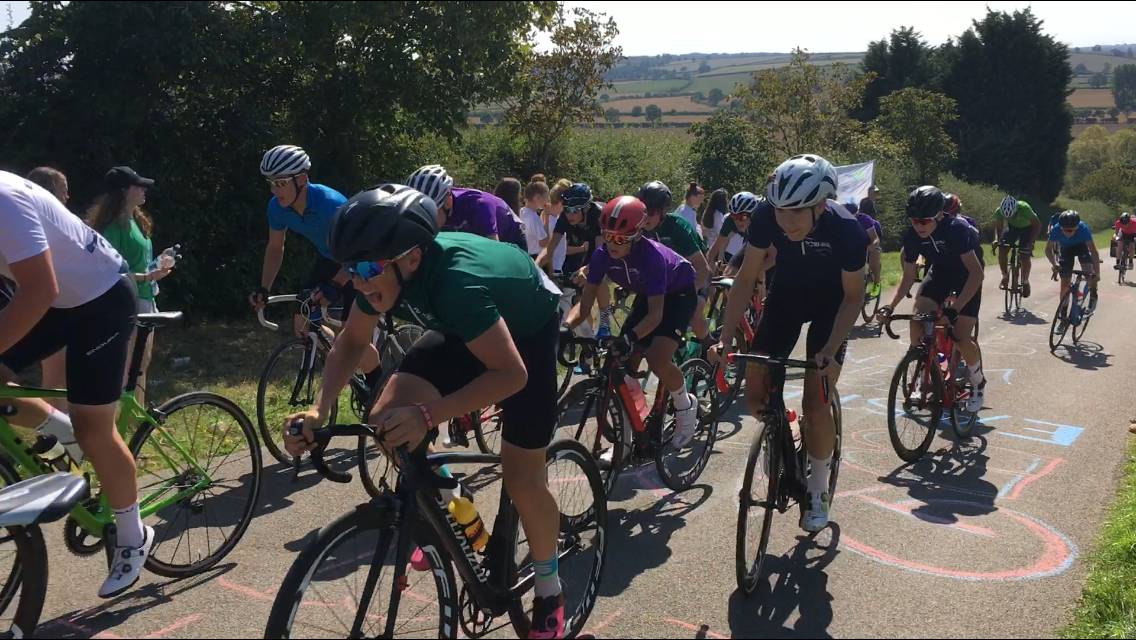 Saturday evening saw the last of the educational workshops, this one being run by UK Anti Doping.

Sunday was an early start as the road race was about an hour away in the village of Slawston and riders had to be up, packed, away to breakfast and at the coach for 7:30am.

The girls road race was up first. Following yesterdays crash, we were down to three riders for this event. Each of our girls raced really hard over the 7 laps. Our girls team was very young and each of them gained huge experience racing at this level, which they can then use as they have the opportunity to come to the school games next year again. 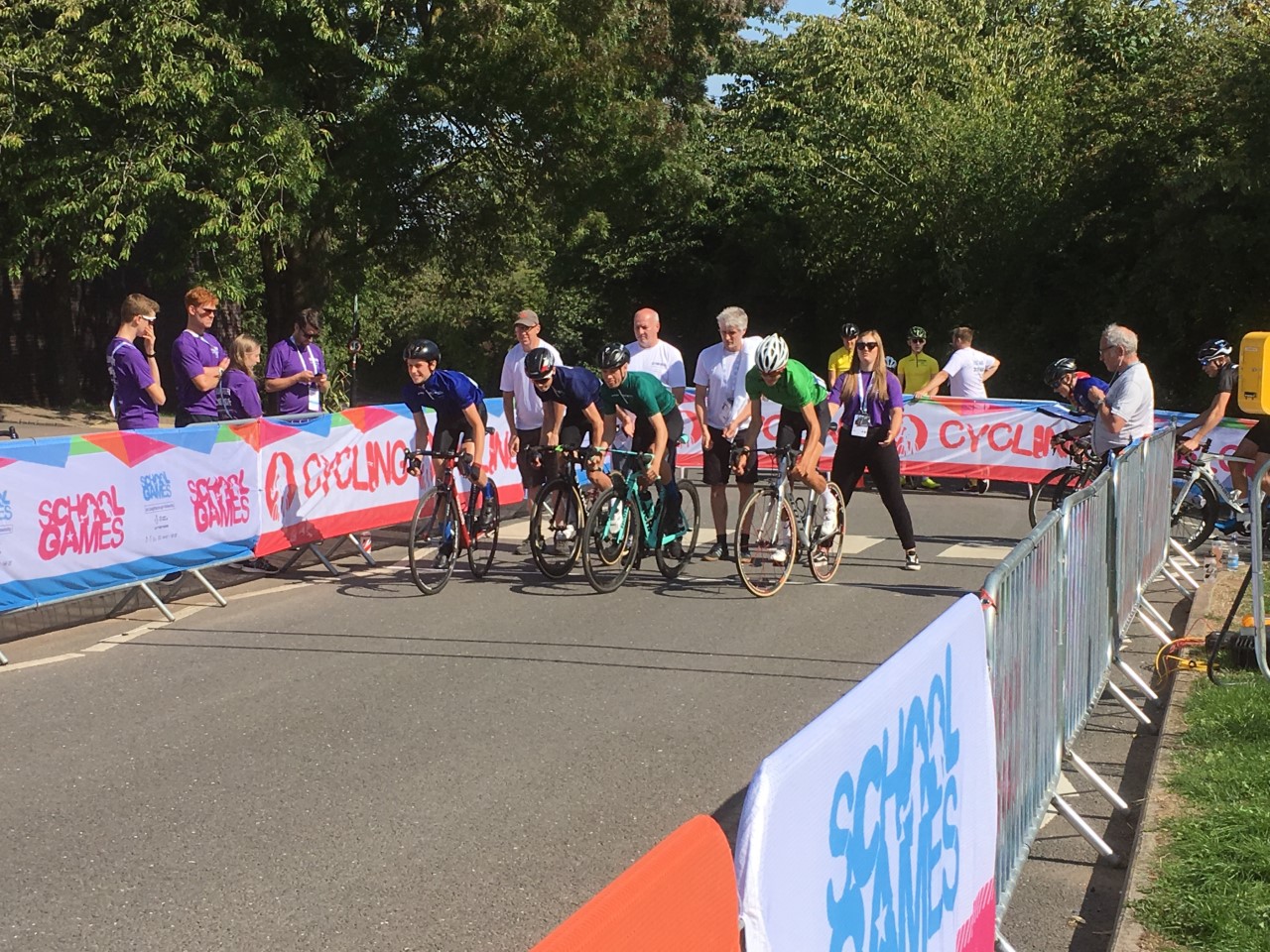 The boys race was the last race of the day and was over 9 laps. The boys had got to see ‘the hill’ during the girls race as this was the feed zone. Initially the all had thought it didn’t look too bad. Their opinion quickly changed during the race. The race stayed together a lot more than the girls race did. Eventually 7 riders got up the road. Unfortunately our riders didn’t get in the break, but remained in the main bunch until the last lap. Two of our riders dropped just off the back of the bunch with the remaining two finishing with strong sprints in the bunch.

We then had the final presentations and riders left on a coach for the airport. 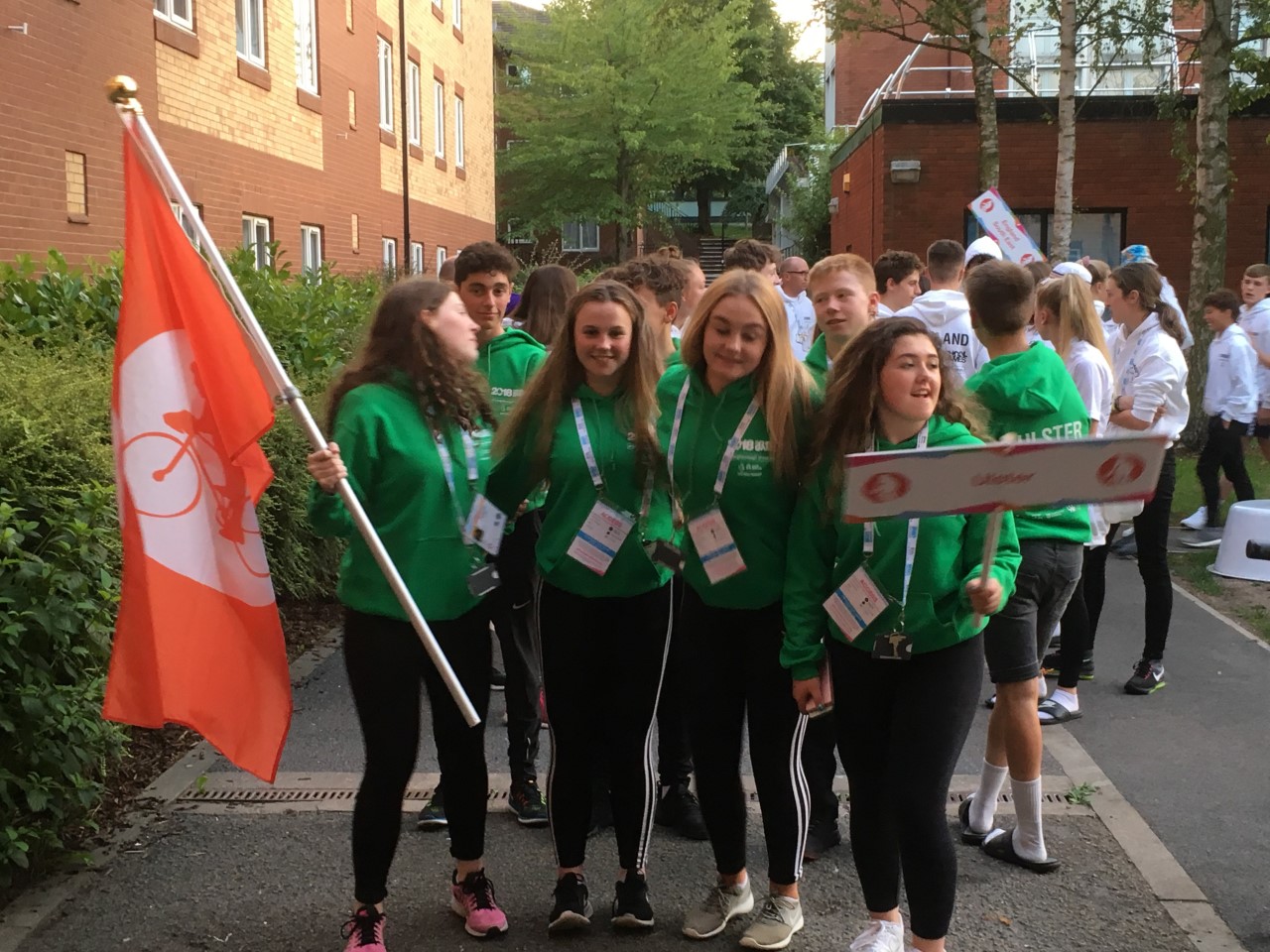 All in all, the experience of the School Games is phenomenal. Not only the racing but the multisports gives riders the opportunity to mix with other athletes in a truly wonderful venue. Three of our riders this year now move on to Junior racing next year and this will hopefully have given them a good insight into what it means to be part of a team if they are away next year. The other 5 riders have all vowed to give their all to get back to the games next year. 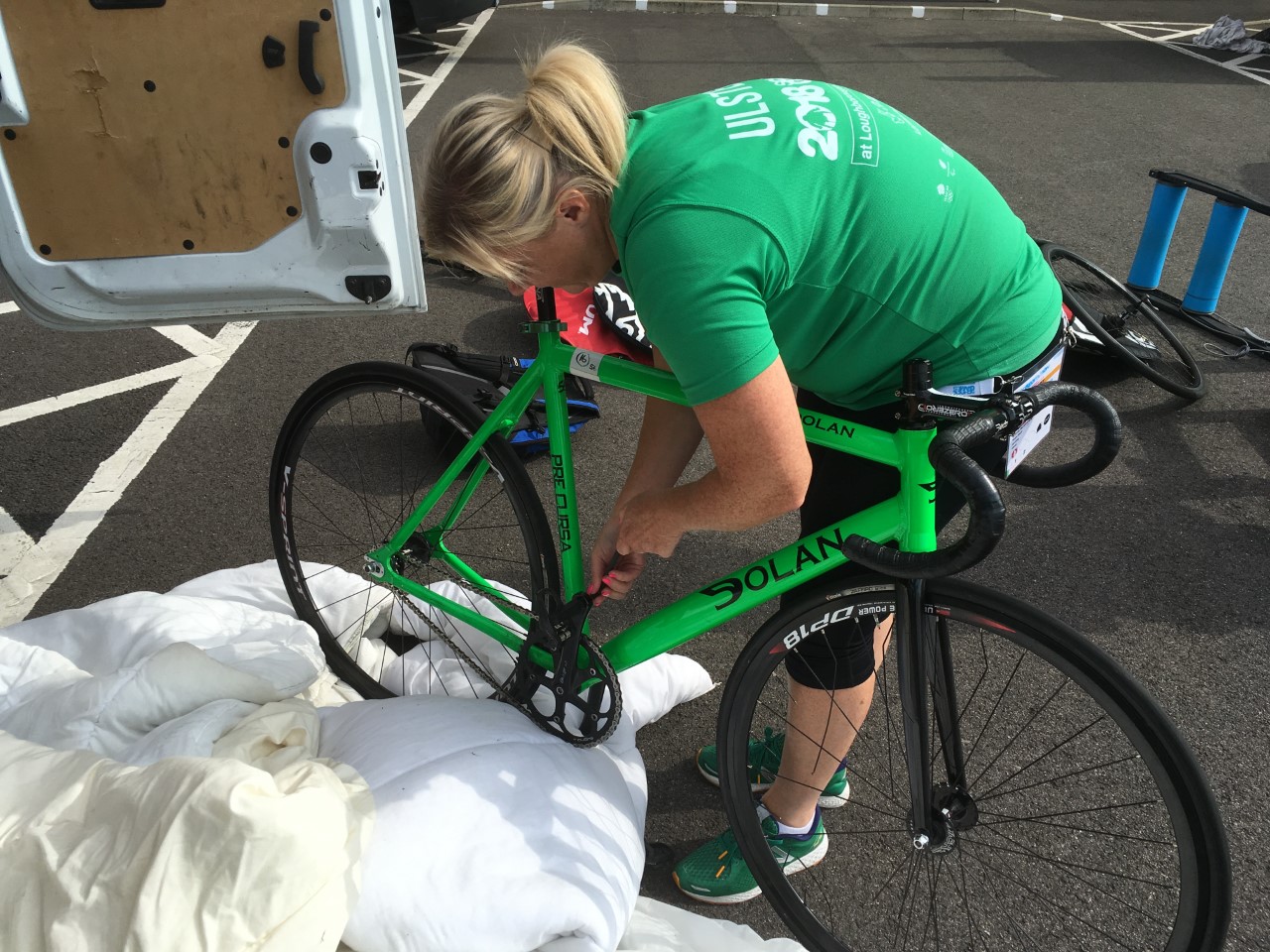 Cycling Ulster would like to thank Paul Dixon and Nicola McKiverigan for looking after the team.