Foyle Cycling to host next instalment in Ulster Roadman Series

Over 100 riders expected to participate on 17 July

Upwards of 100 riders will compete in the next stage of the Ulster Roadman Series, when Foyle Cycling Club hosts a Grand Prix on 17 July. 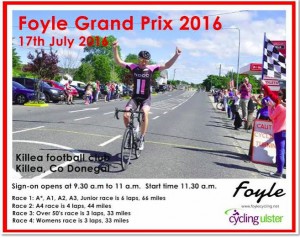 With 2015 race winner David Watson of North Down Cycling Club due to defend his title, Foyle Cycling Club is confident that this year’s race will be one of the most competitive in recent years.

Although the Roadman series had been absent from the Ulster cycling calendar for the last few years, it made its return in March with the Tour of Ards. After further races in Antrim, Angus Fyffe (Omagh CC), Ali MacAuley (Asea) and North Down’s David Hamilton are all competing for the top spot, along with Foyle Cycling Club’s Ronan McLaughlin and Ryan Reilly.

Ronan Gallagher, Foyle CC PRO said: ‘the Killea course has really come into its own over the last three years and is very well liked by the riders. We expect almost 100 cyclists to compete across all disciplines and, weather permitting it should be a fantastic day of cycling.’