The 2016 Ulster Cyclo-cross Championships was hosted by Kinning Cycles at the new venue of Mallusk Playing Fields on the outskirts of Belfast.  The venue has football and rugby pitches, changing rooms and large car parks.  The course was based towards the back of the venue and went around the edges of the pitches making use of the various embankments and steps as well as a large pile of sand which had been conveniently placed to allow the organisers to incorporate it into the course design.  There was a double pit at the top of the hill on some waste ground with the start line on the tarmac road at the entrance to the car park.  Also in the car par 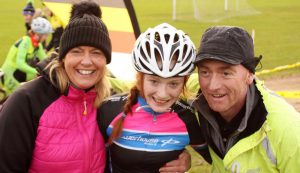 k was the team from the BMX stunt crew who were putting on a display of bike skills as well as letting youth riders have a go.

Race day was dry and bright with hazy sunshine.  The early morning breeze died down to leave a great mild day, fantastic for the late date in December.  Sign on opened at 9:30 with the first race starting at 11:00.  This allowed plenty of time for riders to practice the course, especially the sand pit.  The first race of the day was for the Juniors, Women, Under 16s and Under 14s.  This was the first year that the Under 16s and 14s have been included in the Ulster Cyclo-cross championships as traditionally they have only been part of the support races.  The Junior men started first, followed a few seconds later by the women.  One minute later the Under 16 boys started, followed by the Under 14 boys, Under 16 girls then Under 14 girls with just a few seconds between each group.

Despite only competing in two cyclo-cross races this season John Buller (Banbridge CC) proved he still had good form from his cross-country season to take the win in the Junior men’s race.  Thomas Creighton (Xmtb McConvey Cycles) was on John’s wheel for the earlier laps but couldn’t match his pace towards the end.  Matthew McAllister (Island Wheelers) rounded off the podium.  In the women’s race current Irish champion Beth McCluskey (Scott Orwell Wheelers) put on another fine display of racing to finish well clear of team mate Michelle Geoghegan with Trudy Brown (VC Glendale) third overall but first Ulster rider home.  Diane Wilson (Dromara Cycling Club) was second Ulster rider with Anne Duffy (Cuchulainn CC) third.  In the Under 16 boys race, Lee Harvey (Kinning Cycles) had a comfortable win ahead of Jake Rushby (North Down CC) with Ciaran Dixon (Phoenix CC) taking bronze.  In the U16 girl’s race, there was a good battle between Darcey Harkness (Carn Wheelers), Méabh Flannagan (Ballymoney CC) and Niamh McKiverigan (Powerhouse Sport) with Niamh proving to be the strongest taking the top step ahead of Darcey with  Méabh third.  Dean Harvey (Kinning Cycles) finished almost two minutes ahead of closest rival Darren Rafferty (Island Wheelers) in the three lap Under 14s race with Adam McGeever (AAA Cycling Team) the third boy.  There were only two entries in the Under 14 girls race with Maria McAllister (Island Wheelers) finishing well ahead of Maia Simmons (North Down CC).

The next race started at 12:30 and this was for the M40 and M50 men.  The M40s took off first on this 5 lap race with the M50s starting one minute later.  In the M40s event, the race was for second place as Alan Bingham (Cuchulainn CC) took off like a rocket and remained well clear to the finish line.  The big race was between Brendan Doherty (VC Glendale), Jason Henry and Stephen Cunningham (Shimna Wheelers).  Brendan got dropped off this bunch towards the end with Jason and Stephen sprinting it out to the finish line to take second and third respectively.  In the M50 race, there was a great battle between team mates Peter McConville and Des Woods, both from Newry Wheelers CC, with Peter taking the win in the sprint to the finish line.  John Bogues (Phoenix CC) held onto third place throughout the race. 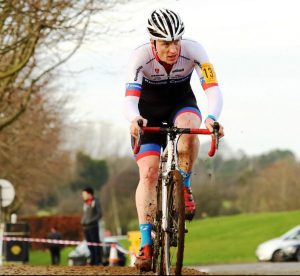 The final race of the day was for the Senior men.  The race started at 2:15 and took in 6 laps of the course.  All the big names were on the start line with the current Irish Cyclo-cross champion, Roger Aiken (Asea Bike Worx), coming into the event in top form, expected to take the win.  Roger didn’t disappoint and had put in a 20-second gap by the end of lap 1.  He went on to take almost 30 seconds out of his rivals each lap to finish almost 3 minutes ahead in the end.  In the early stages of the race, there was a close battle between Barry Kellett (Dromara Cycling Club), Dominic McCartan (Apollo CT), Glenn Kinning (Kinning Cycles) and Graham Boyd (Xmtb McConvey Cycles).  However, Glenn started to pull away from others and powered home to take second.  This, after spending the previous day sorting out the course and shovelling sand, was a great result for Glenn who is coming into form for the upcoming National Championships.  The battle for third then was left to the others, however, Graham Boyd managed to gap the other two to finish uncontested in third place.  Barry and Dominic fought on for the fourth place slot with their race coming down to the final sprint along the sandy finishing straight with Barry getting to the line first.  Team prize went to Dromara Cycling Club when Barry was joined at the finish by Graham Smyth and Espoir rider Peter Davison.  There were five teams entered in the Senior men’s race.

After the races, the riders could avail of the sandwiches provided as well as the showers.  Many thanks to Kinning Cycles and to the volunteers from the other clubs who came along to make this a great championship event.  Also, big thanks to Belfast City Council for permitting the race at this venue.  Round 3 of the Kinning Cycles Series takes place on Sunday 1 January 2017. 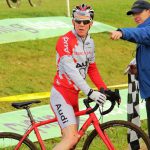 Thank you to Martin Grimley for the report 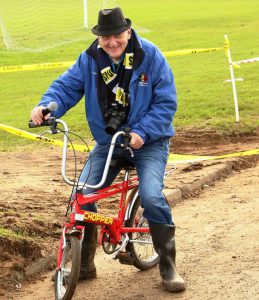