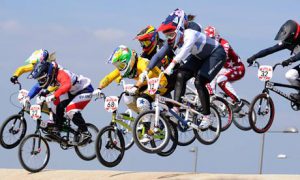 The purpose of the meeting was to get some feedback on what Cycling Ulster could do for the BMX side of the sport, get some input as to how the track commission works and then to look to form a Cycling Ulster BMX Commission,

The Executive members stressed the need to send results and reports through to Marian Lamb or to Maurice McAllister in order to promote the sport more widely but especially onto the www.ulstercyclingnews.com and www.cyclingulster.com websites.

Marian Lamb provided information to the group about how to get members vetting using Access NI and that Cycling Ulster supply a 3 hour, free to charge, training in safeguarding.  Details can be found on www.cyclingulster.com.

The Designated Officer course still needs to be done through local councils.

The club is due to host the second round of the winter series next Sunday, will be hosting the Ulster championships and the National Championships later this year.

The group were given an introduction into the way a budget would have to be administered and how a clear, open and fair system of budget spend needs to be put in place.  Marian Lamb provided 3 USB pen drives which contain documents pertaining to budgets, claim sheets etc.

Election of members to the BMX Commission

Martin Grimley conducted the election process.  Expressions of interest were sought from the group to be on the commission.  The 3 key roles were then filled with the other volunteers on as committee members.

The elected members of the Cycling Ulster BMX Commission are as follows.

How other commission’s work

Gary McKeegan provided details of the Cycling Ulster Track Commission spend for 2016 and a budget breakdown for 2017 in order to provide some guidance for the BMX Commission when it came to creating their own budget.

The Executive would allocate a representative to the commission who would attend meetings with the role of guidance regarding polices.  CU chairman would arrange to get this fulfilled Maurice McAllister.

Cycling Ulster Executive members and CU off-road and track commission members stressed that they were there to help and support the new commission where possible.