Despite the early evening rain in Derry city, over 1000 people came out to cheer on the competitors in this evening’s Maiden City CRIT, which finished in beautiful sunshine on Foyle Street. 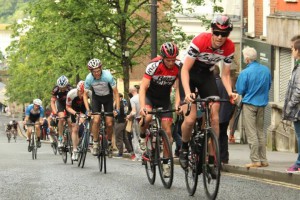 With almost 40 top riders in the field representing every county of Ulster, Darnel Moore of Caldwell Cycles in Omagh took top prize as he held off a stiff challenge from Christopher McGlinchey of ChainReactionCycles, and last year’s winner Angus Fyffe from Omagh Wheelers.

Cheered on by the crowds watching from vantage points across the route, the riders took on the gruelling climb of Shipquay Street and the tight turns of inner city Derry to deliver a pulsating night of racing in the heart of the city. 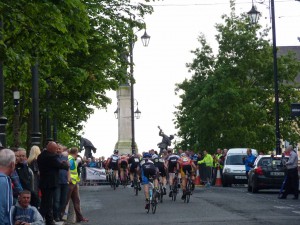 Foyle Cycling Club PRO, Ronan Gallagher, said that despite the number of riders being down on last year due to poor weather in the early part of the day, the night delivered for those watching: ‘the quality of the field was excellent and the camaraderie and competition between the cyclists was a great example to those watching.’ 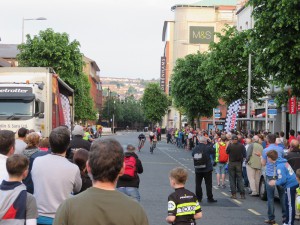 Race spot primes – which were sponsored by Socycle of Augher, County Tyrone, were won by Francis Cassidy, Samuel Carmichael and Christopher McGlinchey.