Cycling Ulster would like to congratulate Wicklow’s Lara Gillespie who has struck gold in the Junior Women’s Points Race, at the European Championships in Aigle, Switzerland. Lara was competing just a few weeks ago in Ulster’s premier women’s race, The Tour of Omagh.

Going one better than her silver medal two days ago in the Individual pursuit, Lara rode an aggressive and attacking race putting her opponents under pressure in the final third of the race.

Gillespie picked up points consistently throughout the race and took joint lead in the final laps after a gutsy attack where she picked up points before been brought back by the diminishing leading group. The Ukrainian rider attacked and gained the all-important lap that put her 5 points clear going into the final sprint. With double points up for offer, Lara opened the final sprint with 350 metres to go and opened a gap that she held to the line to take the best win of her career. 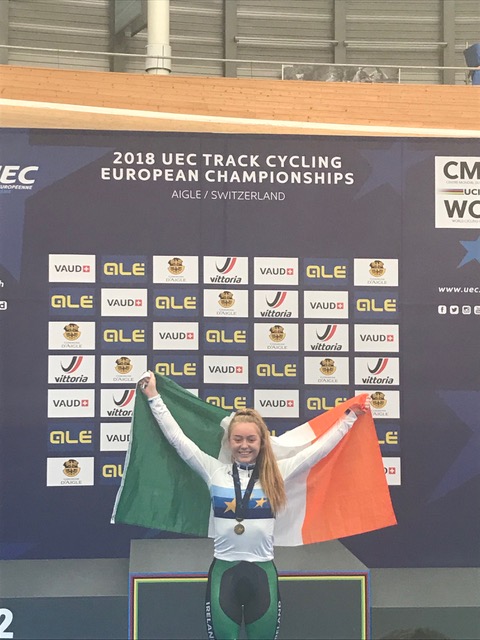 The 17-year-old was over joyed with her win – “Once I knew I was on equal points I put my head down and decided to just go for it. I was trying to do everything right and I didn’t want anything to stop me from winning. I was ecstatic when I knew I had won. I was so proud standing up on the podium and actually got to hear the Irish anthem. I was so happy.”

The teenager has been competing on the Cycling Ireland Talent Team since she was U16, and won a medal at last year’s Youth Olympics in the Time Trial. Having spent three camps in the CI training base in Majorca this year on National Camps Lara has made significant progress in her track craft – “I was nervous for worlds as I knew other riders would have had more experience but doing the training camps and getting the opportunity to race worlds give me the confidence on how to race each event and helped me win today”.

“ I’d like to say a Massive thank you to all that helped me get to this point and the coaches that put all their time and effort into this and my family who came her to support me.”

Next up for the Irish cycling team is Madison races for U23 Men and women and Junior women on Sunday.