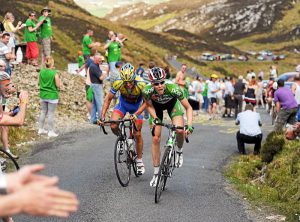 The Cycling Ulster Road Commission is pleased to announce their provisional programme of competitive events for their male teams in the senior, under 23 and junior categories for the 2017 season.

The highlight of the planned programme will see an Ulster team compete in An Post Rás which takes place from 21st to the 28th  May. With five of the eight stages of this year’s Irish national tour taking place on Ulster roads, primarily in the county of Donegal, it is fitting that an Ulster team returns to take part in the race for the first time in over a decade.

In order to support this ambitious competitive programme, the Cycling Ulster Road Commission will be holding a sportive based on one of the Donegal stages of this year’s An Post Rás. The planned sportive which has been dubbed ‘Etape Rás’ will enable members of Cycling Ulster and others from outside of the province to take on the same terrain that will be tackled by the international riders while also offering them the opportunity to raise funds to support the Cycling Ulster team.

The province’s two major stage races, the Tour of the North and Tour of Ulster are also set to be tackled by riders wearing the Cycling Ulster jersey. These two events should see a mixture of junior and senior riders involved in the team over the Easter and May Bank Holiday weekends.

Chairman of the Cycling Ulster Road Commission, David McCann (on the left at the 2012 London Olympics) was enthusiastic while speaking about the plans for the upcoming season, stating:-
“The standard of racers in Ulster right now is fantastic. Whilst development is crucial, I have every belief we have riders that can be targeting podiums at the highest level.”

Cycling Ulster is now seeking male riders in the senior, under 23 and junior categories who may be interested in taking part in this exciting programme of events to contact Patrick Withers by email on pswithers@hotmail.com. Please include your club, racing category and the events you would like to be considered for selection.