Ireland will host the 3rd round of the Enduro World Series from the 13th to the 15th of May 2016. The World’s top Mountain Bike Enduro riders will line out in the Wicklow Mountains for two days of practice and one day of racing in a car rally style format called Enduro. 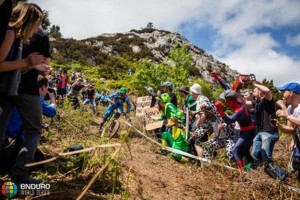 Enduro racing is about riding your mountain bike as fast as you can on downhill ‘special stages’, which are timed. The event has attracted the super stars of the sport with several World Champions taking to the start line at the weekend.

Enduro is a growing division of mountain bike racing that is similar to car rallying. Riders set off individually and face several ‘special stages` – which are timed descents. The winner has the lowest cumulative overall time for these special stages.

The Emerald Enduro features 7 special stages that operate in a ring around Carrick Mountain in Wicklow. Riders will leave the race village and pedal to the top of Carrick for several stages before returning for a 30 minute lunch stop in the event village and then face into the final few stages. The riders are seeded and the last man on course is the number one seed.

The race course layout allows spectators to catch the top riders on every stage, simply move to the right after each stage to access the next stage.

Greg Callaghan who won last year will be one of the favourites this year again, but the field is strong, with many riders capable of winning on a good day. Last year`s World Series overall winner, American Richie Rude won the opening two rounds this year and is undoubtedly the one to watch.

In the ladies field Tracy Moseley has semi-retired from racing having won all three EWS World Championships so far. This year she is racing only selected races and the Emerald Enduro is one.

As to the Irish, last year Leah Maunsell was barely old enough to race yet took the victory at under 21. She’ll be looking to repeat this year and Killian Callaghan who was third in the hotly contested Under 21 male category is hungry for more success.

Last year was a fairytale ending for Greg Callaghan as he took his maiden win, and he is seriously on the hunt for the top step of the podium again on home soil.