Derry Mayor launches ‘A Night at the Races’

With a strong field expected, including top Rás rider Ronan McLaughlin and last year’s A1 race winner, Angus Fyffe, ‘A Night at the Races’ will take place on Tuesday 7 June at 20.00. 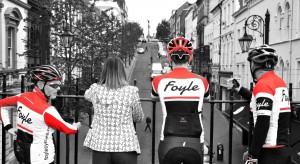 Drawing crowds of 100s of spectators since 2012, the race is one of the blue ribbon cycling events to be held in Ulster, and this year the total prize fund exceeds £1000 for the first time.
Forming an integral part of the local Council’s Big Bike Festival, this year’s event is supported by Tourism NI.
Ronan Gallagher, Foyle Cycling PRO said: ‘this is a fantastic event being hosted in the City and we’re delighted that Tourism NI recognises its importance to the City. We hope that the people of Derry will come out to encourage and cheer on the riders on what is one of Ireland’s most difficult circuits.’

The adult races will be preceded by a junior Sprocket Rocket race, which will be held in Foyle Street. With the first race set to commence at 20.00 sharp, spectators are being asked to get to the circuit for 19.50. Cyclists with the appropriate race licence can sign on at: http://www.entrycentral.com/Maiden_City_criterium. 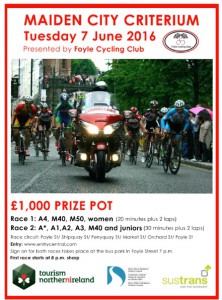