Christie blows field away as his rich vein of form continues

Marcus Christie, who bettered his own 50-mile TT Irish record time last Wednesday night, continued his winning form by setting a course record of 18:34 at the 10-mile TT in Eglinton, County Derry, yesterday. 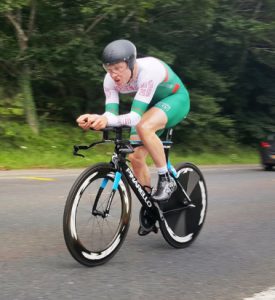 (L) MARCUS CHRISTIE on his ex-Wiggins Pinarello Bolide on his way to crushing the opposition in yesterdays Ulster 10 Mile Time Trial Championship.

The event, which was hosted by Foyle Cycling Club, saw an impressive field of 70 riders compete across all disciplines.

With a strong southerly wind aiding riders on the return journey to the finish, Christie mastered the circuit and had almost two minutes to spare on Chris Hutchinson of Team Madigan in second place, with Chrsitian Nachtigall from Belfast club Phoenix completing the podium positions.

The team race was won by Carn Wheelers.

Foyle Cycling Club PRO, Ronan Gallagher, commented: ‘it was a fantastic day’s racing and with such a powerful rider as Marcus Christie in the field, the bar has now been set higher for other riders to compete.’ With the Ulster Road Championships due in the County Derry village in September, Christie will be the man to beat.