Two fully marshalled routes 80km-125km will be available through beautiful scenery along the North Antrim Coast.

The Club hopes to build on the success of last year’s sportive which raised a fantastic £3300 which was divided between 2 local charities.

This year all proceeds raised from the sportive will be donated to another fantastic charity The Northern Ireland Children’s Hospice.
The children’s hospice has provided fantastic support to one of the club members and his family throughout Oran’s short life, sadly little Oran Campbell passed away peacefully in the Children’s Hospice on 31st July.
This year’s sportive will therefore be held in memory of Oran Campbell. 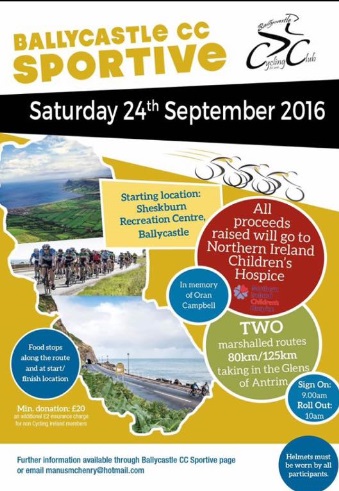