With two wins under his belt already in the opening weeks of the 2016 season,  Roger Aiken was again on the top step of the podium in the opening round of the Ulster Road Series, the Tour of Ards on Saturday 12th March.
The ASEA-Wheelworx man held off fellow escapee Craig McAuley (Caldwell Cycles) on the line in Newtownards, having pulled clear of the main breakaway in the final run in from Greyabbey, with the pair finishing just over 30 seconds clear of the 6 remaining breakaway riders.
Typical early season breezy and damp conditions faced the riders as they left Newtownards for a 65 mile loop around the Ards Peninsula, with attacks active from the off, and at 26 miles the `See-Sense` prime was taken by local North Down CC rider Davy Hamilton, with a group of 8 riders moving clear after the second Cloughy loop. 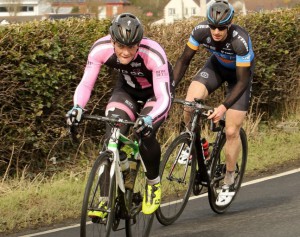 As well as Hamilton, the group included Akien and McAuley; Akien`s Asea team mate Ali MacAuley with Aaron Swan (Ballymoney CC), Craig Rea (Phoenix CC), Glenn Kinning (Kinning Cycles), Chris McGlincney (Chain Reaction Cycles)
Once organised, this strong group were not to be caught, and with a tailwind run up the peninsula to the finish, it was Aiken and McAuley who slipped clear with Aiken taking the verdict on the line, and McGlinchey leading the chasers home for third place 33 seconds later. 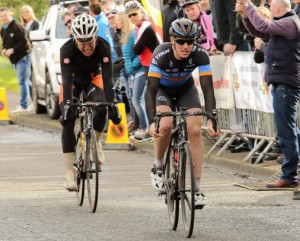 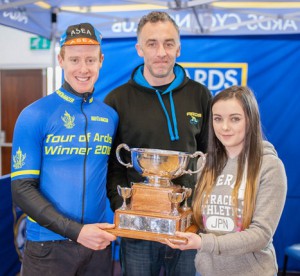 The remaining rounds of the Ulster Road Series are –