A short three minute handicap separated the A3, A2 and Scratch groups, with the Scratch men making the connection to the front on the second of six laps.

(Below) Aiken looks comfortable in the early stages of the races; saving his efforts for the finish. (Pic Davy McVeigh – The Belgian Project) 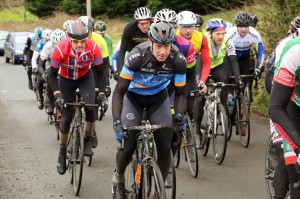 Despite efforts, the strong winds dictated that no group would stay away too long, however an effort on the final lap by Aiken, James Curry (Banbridge CC), and Aaron swan (Ballymoney CC) saw daylight between them and the bunch, however they were reeled in which set up a bunch finish, where Curry made the running but planned his move too early, with Aiken coming through for the win.